So I’m sitting at the kitchen table drinking my coffee with my neighbor’s son who is visibly distressed. I ask him, hey Donald, what’s up with the long face? You look like your dog just got run over.  The look on his face changed as the last word rolled off my tongue and I knew I had said something terribly wrong. He looked me dead in the eye and said, “It’s my grandmother’s dog, Daisy. She has cancer and is dying.  Grandma had a very hard time asking me to help  her with Daisy because of how she feels about pot.  She hates it, he said, and she doesn’t understand why I smoke it. However the medication Daisy’s vet was prescribing for her pain was only making her more uncomfortable. The prognosis was that Daisy was terminal and all I want to do is make her comfortable in her final days.  The vet suggested medical marijuana but he would not be able to give her a marijuana prescription for it explaining that it doesn’t work like that.  That made her very angry she told Donald. “Why can’t I get it for Daisy?”  Isn’t it legal now?

I had heard about this dog biscuit that had medical marijuana for pets like the edibles you can get for people.  I told him I would check since I had no idea where I had seen it.  I checked with some people and found out it was with a company called DOAP.com , a delivery service.   I told Donald and forgot about it.   Three months later I got a card in the mail from Donald’s grandmother,Judy.  Donald’s grandmother thanked me for making Daisy’s last days more comfortable.  I felt so good reading her card that I had to let the people at DOAP know about it.   I wanted them  to feel as good as I do and to know,  that their biscuits really made an elderly woman happy as her treasured pet was able to have comfort and  peace in his final days. 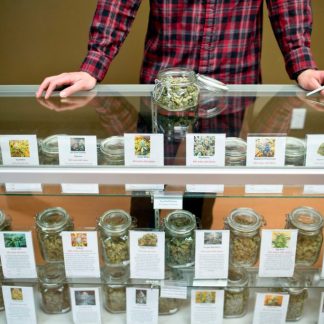